Regions are 2D enclosed areas that have physical properties such as centroids or centers of mass. You can combine existing regions into a single, complex region.

Regions can be used for:

You can create regions from objects that from close loops. Loops can be combinations of lines, polylines, circles, arcs, ellipses, elliptical arcs, and splines that enclose an area.

You can create regions by unifying, subtracting, or intersecting them:

When a boundary cannot be determined, it might be because the specified internal point is not within a fully enclosed area. In the example below, red circles are displayed around unconnected endpoints to identify gaps in the boundary. 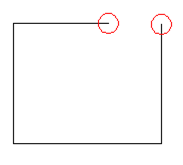