Creates a three-sided or four-sided surface in 3D space.

After entering the last two points for a 3D face, the command repeats automatically using the two points as the first two points of the next 3D face. For example: 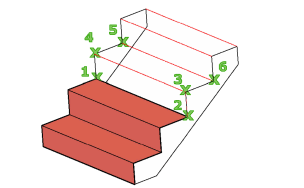 Defines the start point for the 3D surface. After entering the first point, enter the remaining points in a natural clockwise or counterclockwise order to create a normal 3D face. If you locate all four points on the same plane, a planar face is created that is similar to a region object. When you shade or render the object, planar faces are filled.

Defines the second point for the 3D surface.

Defines the third point for the 3D surface.

Defines the fourth point for the 3D surface.

The Third point and Fourth point prompts are repeated until you press Enter. Specify points 5 and 6 at these repeating prompts. When you finish entering points, press Enter.

Controls which edges of a 3D face are visible, allowing for accurate modeling of objects with holes. Entering i or invisible before the first point of an edge makes the edge invisible.

The invisible specification must precede any object snap modes, XYZ filters, or coordinate input for that edge. You can create a 3D face in which all edges are invisible. Such a face is a phantom; it does not appear in wireframe presentations but can hide material in line drawings. 3D faces do appear in shaded renderings.

You can combine 3D faces to model complex 3D surfaces.