About Adjusting the Grid and Grid Snap

About Adjusting the Grid and Grid Snap

To enhance drawing speed and efficiency, you can display and snap to a rectangular grid. You can also control its spacing, angle, and alignment.

The grid is a rectangular pattern of lines or dots that cover the entire XY plane of the user coordinate system (UCS). Using the grid is similar to placing a sheet of grid paper under a drawing. The grid helps you align objects and visualize the distances between them. The grid is not plotted.

Grid Snap restricts the movement of the crosshairs to intervals that you define. When Snap is turned on, the cursor seems to adhere, or "snap," to an invisible rectangular grid when you create or modify objects.

Grid and Snap are independent settings but are often turned on at the same time.

The term  grid snap and  snap are used interchangeably. Referring to  grid snap is useful for differentiating it from  object snap, a different feature.

Control the Display Style and Area of the Grid

You can change the display style of the grid with several options in the Snap and Grid tab of the Drafting Settings dialog box. For example, the grid displays as a rectangular pattern of lines by default, but you can change it to the legacy dotted grid style when the visual style is set to 2D wireframe. 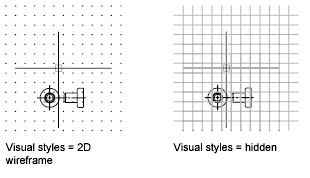 Another display option controls the area covered by the grid. You can limit the extents of the grid to a rectangular area rather than the entire XY plane of the UCS. This option is useful if you need to focus your work on a portion of the drawing area.

If the grid is displayed as lines rather than dots, darker lines called  major grid lines display at intervals. When working in decimal units or with feet and inches, major grid lines are especially useful for measuring distances quickly. You can control the frequency of major grid lines in the Drafting Settings dialog box. 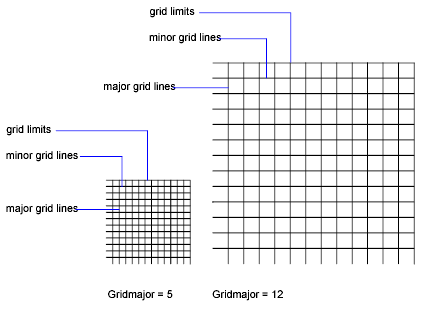 When the grid is displayed as lines and the snap angle of the grid is set to a value other than 0, the grid will not display.

Change the Grid Dynamically During Zooming

If you zoom in or out of your drawing, the grid spacing is adjusted automatically to be more appropriate for the new magnification. This feature is called adaptive grid display.

For example, if you zoom out, the density of displayed grid lines reduces automatically. Conversely, if you zoom in, additional grid lines display in the same proportion as the major grid lines.

As you work, you can turn Grid and Snap on and off, and you can change the grid and snap spacing. The snap spacing does not have to match the grid spacing. For example, you might set a wide grid spacing to be used as a reference but maintain a closer snap spacing for precision when specifying points.

Change the Grid and Snap Angle and Base

If you need to draw along a specific alignment or angle, you can change the grid and snap angle by rotating the user coordinate system (UCS). This rotation realigns the crosshairs on the screen to match the new angle. In the following example, the UCS is rotated 30 degrees to match the angle of the anchor bracket. 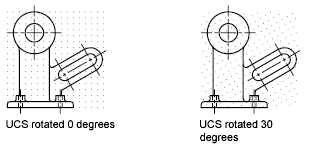 The grid and snap points are always aligned with the UCS origin. If you need to shift the grid and grid snap origin, move the UCS.