Creates a spline in the gap between two selected lines or curves.

Select each object near an endpoint. The shape of the resulting spline depends on the specified continuity. The lengths of the selected objects remain unchanged. 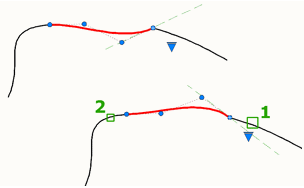 Selects a line or open curve near the end where the spline should start.

Selects another line or open curve near the end where the spline should end.

Specify one of two types of blends.

Creates a degree 3 spline with tangency (G1) continuity to the selected objects at their endpoints.

Creates a degree 5 spline with curvature (G2) continuity to the selected objects at their endpoints.

If you use the Smooth option, do not switch the display from control vertices to fit points. This action changes the spline to degree 3, which will change the shape of the spline.