While drawing, the command line will prompt you for a point where you can use the mouse to specify a point, or you can enter a coordinate value at the command prompt. While entering coordinates, there are three different methods that you can use.

Using the Direct Distance input method is the simplest way to draw elements. To use direct distance, all you need to do is move your cursor in the direction you would like to draw your drawing element and enter a distance in the command line. The drawing element will be drawn at the angle your cursor is pointed, and the distance entered in the command line.

This same input method works for most drawing commands such as move and copy. For example, after starting the move command and selecting an object you want to move, you can move your mouse in the direction you would like to move the object and enter a distance of how far that object should be moved in that direction.

While using the Cartesian system, you can use two different input types in the command line. The first we will discuss is Absolute Coordinates. To input absolute coordinates, all of the values entered will be based on the (0,0) drawing origin. You can specify absolute coordinates with the # prefix and then the coordinates. So if we wanted to start drawing the line at (3,4), we would input #3,4 in the command line. This will start the line at 3 units in the X-axis and 4 units along the Y-axis. Below is an example of where the line starting at (3,4) would start in the drawing. 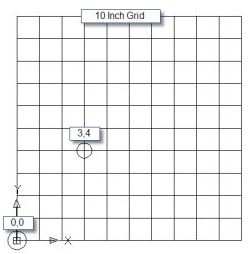 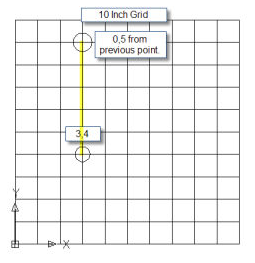