With the 3D Move gizmo, you can move selected objects and sub-objects freely or constrain the movement to an axis or plane. 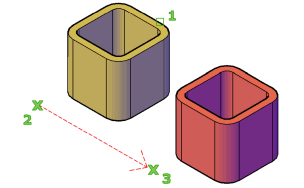 The 3D Move gizmo is displayed at the center of the selected 3D object or objects by default. The 3D Move Gizmo shortcut menu offers options for aligning, moving, or changing to another gizmo.

For example, you can also align the 3D Move gizmo with the plane of a face or object by using the Align Gizmo With > Object option on the shortcut menu. The direction of the move operation is then constrained relative to this work plane.

Selects the 3D objects you want to move. When you have selected the objects, press Enter.

When you have selected an object, the gizmo is displayed. You can constrain the movement by clicking one of the following locations on the gizmo:

When you are specifying the move using the gizmo, sets the new location of the selected objects. Drag and click to move the objects dynamically.

When you are specifying the move using the gizmo, creates a copy of the selected objects instead of moving them. You can make multiple copies by continuing to specify locations.

Specifies the base point of the 3D objects you want to move.

Specifies a relative distance and direction for the placement of the selected 3D objects using coordinate values that you enter at the command prompt.