Creates a mesh by revolving a profile about an axis.

Select a line, arc, circle, or 2D or 3D polyline to sweep in a circular path around a selected axis. 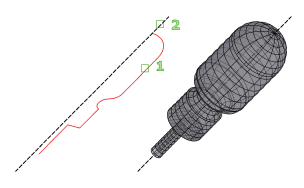 The MESHTYPE system variable sets which type of mesh is created. Mesh objects are created by default. Set the variable to 0 to create legacy polyface or polygon mesh.

Object that Defines Axis of Revolution

Select a line or open 2D or 3D polyline. The axis direction cannot be parallel to the plane of the original object.

The vector from the first to the last vertex of the polyline determines the rotation axis. Any intermediate vertices are ignored. The axis of revolution determines the M direction of the mesh.

If set to a nonzero value, starts the mesh of revolution at an offset from the generating path curve.

Specifying a start angle starts the mesh of revolution at an offset from the generating path curve.

Specifies how far about the axis of revolution the mesh extends. The included angle is the distance through which the path curve is swept.

Entering an included angle that is less than a full circle prevents the circle from closing.

The point you use to select the axis of revolution affects the direction of revolution. The mesh in the following example was created by specifying a start angle of 0 degrees and an included angle of 90 degrees.