About Modifying Edges on 3D Objects

About Modifying Edges on 3D Objects

You can select and modify edges on a 3D solid or surface.

Move, rotate, and scale the edges on 3D solids and surfaces using grips, gizmos, and commands.


You can use MOVE, ROTATE, and SCALE to modify edges on 3D solids and surfaces just as you can for any other object. Press and hold Ctrl to select the edge.

If you move, rotate, or scale an edge on a 3D solid primitive, the history of the solid primitive is removed. The solid is no longer a true primitive and cannot be manipulated using grips and the Properties Palette.

Edges on regions can be selected, but do not display grips. These edges can also be moved, rotated, and scaled.

As you drag an edge, press Ctrl to cycle through modification options. 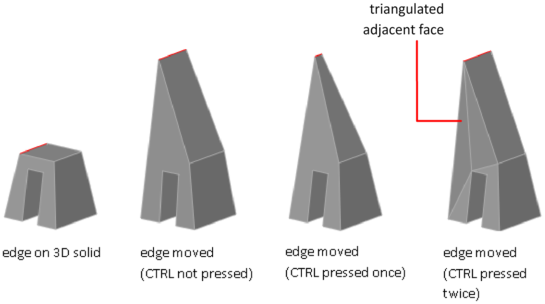 If you press and release Ctrl a third time, the modification returns to the first option, as if you had not pressed Ctrl.

Rather than pressing Ctrl to cycle through edge modification options, hover over an edge grip to display the grip multi-functional menu.

You can also delete edges that completely divide two coplanar faces using one of the following methods:

Round, fillet, or bevel the edges of 3D solids using FILLETEDGE and CHAMFEREDGE.

Use the  Chain option of FILLETEDGE to limit selection to tangent edges.

You can modify the color of an edge on a 3D object by selecting the edge and changing the Color property in the Properties Palette.

You can copy individual edges on a 3D solid object. Edges are copied as lines, arcs, circles, ellipses, or splines.